Air from an attached garage can enter the living space of the home if there are leaks in the air barrier between the two spaces and if the home is at a negative pressure with respect to the garage due to natural forces or due to the use of mechanical exhaust ventilation in the living space (Rudd 2014) or other depressurizing appliances like a range hood fan or a clothes dryer.

The surest way to keep garage fumes out of the house is to build a detached garage. Since most houses are designed with attached garages, plan ahead in house design and construction to make sure a continuous air barrier is installed between the house and the garage. Also consider installing supply or balanced ventilation rather than relying on exhaust fans alone for ventilation. DOE-sponsored research has shown that installing supply ventilation (a fresh air intake connected to the central air handler) or balanced ventilation such as an energy recovery ventilator (ERV) or heat recovery ventilator (HRV) can help keep the house pressure balanced or positively pressurized with reference to the garage which also minimizes the likelihood of garage air entry into the house (Rudd 2014).

Thorough air sealing of the house-to-garage air barrier and installation of an exhaust fan in the garage are two measures specified in the U.S. Environmental Protection Agency’s (EPA’s) Indoor airPLUS requirements that can help minimize the entry of garage emissions to the home if the home has exhaust-only ventilation. See the guides Air Sealing Attached Garage, Garage Rim/Band Joist Adjoining Conditioned Space, and Mechanical Ventilation for Attached Garage for more information.

Testing of the level of depressurization of the house with respect to the garage can also help indicate if air is moving from the garage into the home. Testing is required for EPA Indoor airPLUS certification if the home has an attached garage, if a garage fan is not installed, and if the home uses exhaust-only ventilation. This guide provides a simple test method that can be used to help determine whether the garage-to-house barrier is adequately air sealed, based on Building America-supported research and research by others (for example, Rudd 2014, FSEC, and Calcs-Plus).

Some conditions, for example, if the house has a leaky house-to-garage interface and a very leaky garage-to-outside interface, can yield a false positive result; i.e., it might look like the house-to-garage air barrier is tight enough when in fact it isn’t. To confirm that the test isn’t yielding a false positive result, a second test is run with the same setup except that this time the overhead garage door is open. The CFM50 with the garage door open is compared to the CFM50 when the garage door was closed. If there is more than a 6% difference in the CFM50 readings, then the house fails and the house-to-garage air barrier should be inspected for air leaks (Rudd 2014). One way to do this is to depressurize the house and run a theatrical smoke machine in the garage. The smoke will be pulled in through any cracks in the wall showing you where the leaks are.

How to Test Pressure Difference between the House and the Garage

1. Collect the equipment needed to test the pressure difference between the house and the garage while the house is being depressurized to 50 Pascals with reference to outdoors.

The equipment needed includes a blower door test kit, two manometers, and at least six pieces of plastic tubing along with two T-fittings for the tubing. In the drawings below, we are showing three pieces of red tubing and three pieces of green tubing to distinguish them (Figure 1). In this example one of the manometers is a  smart manometer (in this case, the DG1000 by The Energy Conservatory (TEC)), which has the ability to “cruise” control the blower door so that it will hold the home at 50 Pascals with reference to the outdoors. If you don’t have a smart manometer (SM), you can use a standard manometer; you’ll need a second person to control that manometer to keep the pressure at 50 Pa WRT outside. . The second manometer can be a standard two-channel manometer (2CM) (in this example, the DG700 by TEC, see Figure 2).

2. Set up the house for a building air tightness test per ANSI/RESNET/ICC 380-2016. Set up the home the same way you would when conducting a standard blower door test (all interior doors open, all exterior doors and windows closed, garage door to outside closed, HVAC system and all exhaust fans turned off, fireplace door closed or ashes removed or covered with wet newspaper).

3. Install the blower door in an exterior door of the house.

5. Power on the blower door and set the smart manometer to cruise the home at -50 Pascals with reference to outdoors.

As shown in the example in Figures 6 and 7, set up the home for a building air tightness test as per ANSI/RESNET/ICC 380-2016. Using one manometer (a DG1000 by TEC is shown in Figures 6 and 7), bring the home to -50 Pa WRT outdoors (see the manometer manufacturer’s instructions). Record the CFM50 showing on channel “B.” In our example, the reading is 600 CFM50.

Turn the blower door off, open the largest overhead garage door to the outdoors. Leave the door between the garage and house closed. Bring the house to -50 Pa again. Record the CFM50 on channel “B,” in this case 635 CFM50.

8. If the house fails either test, inspect the house-to-garage air barrier and perform additional air sealing, then retest. Air leaks can be investigated by depressurizing the house and running a theatrical smoke machine in the garage. Any locations where smoke is entering the home from the garage are areas with leaks.

All homes with attached garages should have a hard-wired carbon monoxide (CO) alarm with a battery backup installed in the home. This is an EPA Indoor airPLUS requirement and a common sense precaution. Even homes with balanced ventilation can become depressurized, for example, if a high-powered range hood fan is operating with inadequate make-up air or if the clothes dryer and a few exhaust fans are operating simultaneously. Newer cars with remote keyless starters have been known to accidentally be started while located in a closed garage. Verifying the integrity of the house-to-garage air barrier in all homes is an important safety precaution that can save lives.

Thermal Enclosure System.
2. Fully-Aligned Air Barriers.7 At each insulated location below, a complete air barrier is provided that is fully aligned as follows:
2.4 Walls adjoining porch roofs or garages.
2.6 Floors above garages, floors above unconditioned basements or crawlspaces, and cantilevered floors.

4. Air Sealing (Unless otherwise noted below, “sealed” indicates the use of caulk, foam, or equivalent material).
4.7 Walls that separate attached garages from occupiable space sealed and, also, an air barrier installed and sealed at floor cavities aligned with these walls.
4.9 Doors adjacent to unconditioned space (e.g., attics, garages, basements) or ambient conditions made substantially air-tight with weather-stripping or equivalent gasket.

Footnote 7) For purposes of this Checklist, an air barrier is defined as any durable solid material that blocks air flow between conditioned space and unconditioned space, including necessary sealing to block excessive air flow at edges and seams and adequate support to resist positive and negative pressures without displacement or damage. EPA recommends, but does not require, rigid air barriers. Open-cell or closed-cell foam shall have a finished thickness ≥ 5.5 in. or 1.5 in., respectively, to qualify as an air barrier unless the manufacturer indicates otherwise. If flexible air barriers such as house wrap are used, they shall be fully sealed at all seams and edges and supported using fasteners with caps or heads ≥ 1 in. diameter unless otherwise indicated by the manufacturer. Flexible air barriers shall not be made of kraft paper, paper-based products, or other materials that are easily torn. If polyethylene is used, its thickness shall be ≥ 6 mil.

Footnote 45) As defined by ANSI / RESNET / ICC Std. 301-2019, a Dwelling Unit Mechanical Ventilation System is a ventilation system consisting of powered ventilation equipment such as motor-driven fans and blowers and related mechanical components such as ducts, inlets, dampers, filters and associated control devices that provides dwelling-unit ventilation at a known or measured airflow rate.

Footnote 46) Item 7.3 applies to any outdoor air inlet connected to a ducted return of the dwelling unit HVAC system, regardless of its intended purpose (e.g., for ventilation air, make-up air, combustion air). This Item does not apply to HVAC systems without a ducted return.

4.3 Location of Air-Handling Equipment and Ductwork. Do not locate air-handling equipment or ductwork in garages.
Note: Ducts and equipment may be located in framing spaces or building cavities adjacent to garage walls or ceilings if they are separated from the garage space with a continuous air barrier.

5.2 Carbon Monoxide Alarms. All homes equipped with combustion appliance(s) or an attached garage shall have a carbon monoxide (CO) alarm installed in a central location in the immediate vicinity of each separate sleeping zone (e.g., in a hallway adjacent to bedrooms.) The alarm(s) shall be hard-wired with a battery back-up function and placed according to NFPA 720. The alarms shall be certified by either CSA 6.19-01 or UL 2034.

7.3 Owner and Resident Information Kit. Advisory: Provide the homebuyer with information that addresses the importance of ensuring that manually controlled ventilation options (e.g., bathroom, garage (if applicable), kitchen exhaust fans; operable windows, and doors, etc.) are used when strong pollutant sources are present, such as when using common household products (e.g., cleaning products, pesticides) and when using the garage for hobbies or other pollutant generating activities

The procedure for testing garage to house air leakage is identical for new homes and existing homes. See the Scope and Description tabs.

See the U.S. Department of Energy’s Standard Work Specifications for more on the garage to house air barrier.

Air Leakage and Air Transfer Between Garage and Living Space

How Attached Garages Poison our Indoor Air, and What Builders Can Do About It 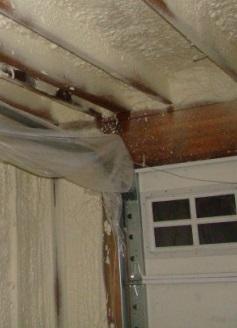 Air-sealed attached garages help block the leakage of carbon monoxide and other contaminants in the garage from getting into the home. This is achieved by blocking and air sealing floor framing cavities in ceilings above the garage that extend into living spaces; seams along the adjoining living space walls and foundation; and all seams and any holes between the ceiling and any living space above. In addition, any doors between the house and the garage should be self-closing and weather stripped, including a tight-fitting threshold sweep.