Two-thirds of American households now have ceiling fans. Sales to do-it-yourselfers account for a brisk and growing business at home improvement centers. A 2011 Home Energy Magazine article claims that it is not uncommon for builders to install ceiling fans in nearly every bedroom and living area of many new homes.

Ceiling fans are electrically powered, ceiling-mounted fans that create air movement which can encourage evaporation and make people feel cooler. Research has shown that, during warm weather, the thermostat can be raised as much as 4°F with no noticeable reduction in comfort if a ceiling fan or other source of air flow is present (U.S. DOE. Fans for Cooling).

Ceiling fans can supplement traditional HVAC systems, but cannot duplicate the wide range of functions HVAC systems perform. While they can circulate the air, they cannot heat, cool, filter or dehumidify it, and they do not provide ventilation.

The following components and factors all affect ceiling fan performance.

ENERGY STAR Rating
To simplify the selection process, select an ENERGY STAR-rated ceiling fan, which must meet several performance criteria to qualify for the ENERGY STAR designation. If the home owner chooses a fan that is not ENERGY STAR rated, review the manufacturers’ performance data and select one that has a high airflow efficiency-to-low watt ratio. This number can be manually input into energy simulation software, such as Energy Gauge, RemRate, etc., to determine the impact of the actual chosen fan in lieu of a default number (i.e., average). The airflow efficiency is the ratio of airflow divided by power at a specific residential ceiling fan setting (low, medium, high, etc.) expressed in cubic feet per minute/watt (CFM/watt). Most software allows manual input of this data, and for typical use the “medium” value is recommended.

Lighting
It is important to also ensure that optional light kits on ceiling fans are ENERGY STAR rated or meet efficiency goals. About 80% of the possible savings from a more efficient ceiling fan are due to more efficient lighting. New fans with lights installed should contain ENERGY STAR-labeled LED or CFL lighting. The designs with built-in ballasts and pin-based fluorescent lamps are typically more efficient than ones with screw-based compact fluorescents, but both are better than incandescent lamps. ENERGY STAR-labeled lighting, in most cases, will reduce a fan’s total lighting energy use by 60% to 80% compared to incandescent bulbs and will lessen the need to change light bulbs as often.

Motor
Basically, there are two types of ceiling fan motors: those with sealed and lubricated ball bearings and those with bearings that rotate in an oil bath. Lubrication provides smooth operation and contributes to the longevity of the motor. Motors with sealed bearings require little or no maintenance whereas motors with oil baths need occasional service, such as adding oil. High efficiency fans use permanent magnet motors and are 3-5 times as efficient as standard ceiling fan motors (which are only about 10% at medium speed). Fans with these efficient motors tend to be more expensive, but they draw 9 watts or less at medium speed as opposed to 30-40 watts for a standard ceiling fan motor.

Motor Housing
The housing is the decorative body of the fan that encloses the fan motor. Fans that use heavier materials, such as die cast metals, tend to vibrate less for housing, provide more stability for longer down rods, and provide a good surface for high quality finishes.

Blade
Pitch is the angle of the fan's blades, and it is measured in degrees. Higher blade pitches usually move more air, which is given in cubic feet per minute, or CFM. However, blade pitch alone does not determine air movement. Other factors such as the motor design and speed, as well as blade design, material, number, and length can contribute to the amount of air movement. Higher pitch is NOT always better — some models offer a higher blade pitch to compensate for a smaller, less efficient motor.

Blades should be sealed from moisture to prevent warping, bubbling, or peeling. Some manufacturers offer special coatings on metal finishes to prevent scratches or tarnishing. High-quality blades are weighed and balanced prior to shipment and come in factory-matched sets. For this reason, they cannot be switched out with other fans. For flexibility in design, a number of manufacturers offer a variety of blade styles and finishes for a particular fan. However, changing the blade style could affect the performance of the fan.

Controls
Most residential ceiling fans (and all ENERGY STAR-qualified fans) feature the ability to reverse the motor and airflow direction, allowing you to operate the fan year-round. This control is usually found on the fan's switch housing. In the winter, reverse the motor and operate the ceiling fan at low speed in the clockwise direction. This produces a gentle updraft, which forces warm air near the ceiling down into the occupied space. Remember to adjust your thermostat when using your ceiling fan — additional energy and dollar savings could be realized with this simple step.

Smart/Remote Controls
Conventional fans use pull chains or rotary wall switches, which are often unintentionally left on even when no one is home. A ceiling fan can only improve comfort if someone is there to feel its air motion. Some ceiling fan models come equipped with smart controls that can increase the energy savings and comfort potential of the fan. A 360-degree infrared motion sensor automatically activates the fan when anyone enters a room and turns the fan off when occupants have left the room. There are also smart controls (Figure 1) that can be easily installed into existing fan canopies. These controllers can be used to adjust fan speed, lights, and light dimming. These functions can be controlled wirelessly via a handheld remote controller or wall keypad. However, some smart controls may not be compatible with fans that have remote controls built into the motor.

Sizing and Clearance
Choosing the right size fan is the first step to optimizing air distribution. Ceiling fan blade-spans range from 29-54 inches – the most popular being the 52-inch model. To determine which size you need, measure the room where the ceiling fan will be installed and follow these guidelines from the  American Lighting Association:

For maximum performance, ceiling fans should be installed, or mounted, in the middle of the room; they should be at least 7 feet above the floor, 18 inches from the walls, and 6 inches from the ceiling. The report Fans to Reduce Cooling Costs in the Southeast by the Florida Solar Energy Center (FSEC) shows that circulation increases when the blade-to-ceiling clearance increases. Six inches is a bare minimum because fan performance drops sharply when the blade-to-ceiling clearance is less. FSEC tests also show that “ceiling hugger” fans provide 40% less air flow than standard ceiling fans, even when a 6” clearance is maintained. Thus, standard ceiling fans with an 8-10 inch blade-to-ceiling clearance are recommended. If ceiling height allows, install the fan 8-9 feet above the floor for optimal airflow.

Larger ceiling fans can move more air than smaller fans. Small- and medium-sized fans will provide efficient cooling in a 4- to 6-foot diameter area, while larger fans are effective up to 10 feet. Fans with larger blades can also provide comparable cooling at a lower velocity than those with smaller blades. This may be important in areas where loose papers or other objects will be disturbed by a strong breeze. Multiple fans work best in rooms longer than 18 feet.

Mounting System
The ceiling fan mounting system is an important consideration during the selection process. There are four common mounts for ceiling fans.

How to Install an ENERGY STAR Qualified Ceiling Fan

Builders are encouraged to verify performance data for ceiling fans using manufacturers’ specifications and/or the ENERGY STAR Product Finder website. Installers should test the operation of the fan before leaving the site to ensure fan does not wobble.

In moderate and cold climates with moderate humidity levels, ceiling fans, possibly in combination with opened windows, may provide all the cooling that is needed; thus alleviating the need for compression cooling.

Even in hot-humid climates, ceiling fans may produce enough of a cooling effect to put off the need for air conditioning during the shoulder seasons. A study by the Florida Solar Energy Center, Are Energy Savings Due to Ceiling Fans Just Hot Air? confirmed that occupants will tolerate a higher thermostat setting when provided a breeze. This effect can significantly impact energy bills. The Florida research showed that for every 1°F the thermostat setting is increased, cooling energy use is decreased by 10%-15%.

The ENERGY STAR Reference Design Home is the set of efficiency features modeled to determine the ENERGY STAR ERI Target for each home pursuing certification. Therefore, while the features below are not mandatory, if they are not used then other measures will be needed to achieve the ENERGY STAR ERI Target. In addition, note that the Mandatory Requirements for All Certified Homes, Exhibit 2, contain additional requirements such as total duct leakage limits, minimum allowed insulation levels, and minimum allowed fenestration performance. Therefore, EPA recommends that partners review the documents in Exhibit 2 prior to selecting measures.

Please see the ENERGY STAR Certified Homes Implementation Timeline for the program version and revision currently applicable in in your state.

Install or replace a ceiling fan for improved energy efficiency.

For a detailed description of ceiling fans, see the Description Tab for new homes.

The home performance contractor should encourage the home owner to do the following:

4. Install and Set Up an Internet-Connected Ceiling Fan

Getting the Most from Your Fan

Shopping for Home Appliances? Use the EnergyGuide Label

Are Energy Savings Due to Ceiling Fans Just Hot Air? 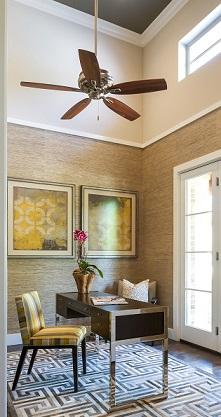 Two-thirds of American households now have ceiling fans. Ceiling fans create air movement that helps people feel cooler. They can save money by assisting mechanical air conditioning or even replacing it in climates with mild or dry summers. High-efficiency ENERGY STAR-rated ceiling fans use permanent magnet motors that are 3 to 5 times more efficient than standard ceiling fan motors. ENERGY STAR ceiling fans can be equipped with high-efficiency lighting, which adds to savings.