Many people give little thought to the shape of the roof beyond its aesthetic appeal. However, the shape of the roof actually plays a significant role in its wind resistance and durability. The two most common sloped roofs are gable and hip roofs. This guide will discuss the durability and performance differences between these two roof types.

There are many practical advantages to both a gable and a hip roof as outlined below; however, in areas that experience high winds and extreme weather, gable roofs catch more wind and rain making them the less durable choice. This guide is not intended to steer you away from gable roofs, but rather to highlight that they need more careful evaluation and possibly additional bracing to mitigate their disadvantages so they can withstand high winds. Between a hip roof and gable roof, there will always be some tradeoffs between cost, aesthetics, and durability.

Advantages of a hip roof:

Disadvantages of a hip roof

Advantages of a gable roof

Disadvantages of a gable roof

A hip roof has slopes on all four sides that come together at the top to form a ridge. As a result, a hip roof design is inherently braced against racking whereas a gable roof needs to be properly braced in order to have adequate strength. Wind tunnel testing of hip versus gable roofs by Meecham (1992) and Shao et al. (2018) found that the peak wind-induced pressures can be as much as 50% lower in a hip roof versus a gable roof. The difference in the wind pressures is illustrated in Figure 1.

Regardless of the roof type, it must be adequately braced. Truss manufactures use software to analyze how the wind forces as specified by ASCE 7 for the home’s ultimate design wind speed will transfer through the truss system and therefore where the bracing is needed as shown in Figure 2. The location where bracing is required is specified in truss package documentation and some truss manufactures also tag the location on the truss where bracing is required; an example of such a tag is shown in Figure 3.

While the International Residential Code (IRC) Section R802.10.3 requires truss design documents, it doesn’t require those documents to specify the method and details of restraint or bracing to be used. Thus, stickers like the one shown in Figure 3 show different options for restraint. Unlike the IRC, the International Building Code (IBC) does require the method and details of restraint/bracing to be fully specified. Many truss manufactures will defer to the higher standards of the IBC even for trusses going to a residential project.

Gable roofs are not inherently stable against the forces induced by hurricanes, high winds, and earthquakes. The connection between the roof and the gable end wall is particularly vulnerable and needs to be braced. The image below (Figure 5) shows a wall failure due to inadequate bracing of the gable end wall.

In order to prevent the gable end wall failure shown in Figure 5, the gable end wall must be properly braced. This bracing is shown in Figures 7, 8, and 9. The strength of the bracing required depends on the peak wind loads the home will experience at its location. These wind loads are determined via ASCE 7, which provides the methods under which these wind load pressures are calculated. Figure 7 shows the bracing that is typical of a home located not in a hurricane-prone zone.

The negative suction forces as well as the wind load cycling imparted onto a home during a hurricane or high-wind event are often high enough that nailed connections alone are not enough to keep members together. Instead metal connectors are used such as the ones shown in Figures 8 and 9. The gable end wall must resist three forces via its connector strength and bracing lumber:  1) the uplift and downward pressures from the roof, 2) the horizontal pressure and suction forces on the wall, and 3) the shear/racking forces on the wall that will otherwise tip the gable roof over like dominos starting from the gable end wall.

Gable end walls in hurricane-prone regions experience forces from wind pressures that are high enough that metal connectors rather than nails are often needed to resist the high forces, as shown in the example details in Figure 8 and 9.

Because hip roofs tend to perform better than gable roofs in hurricane and high wind conditions, many home insurance companies offer discounts for homes with hip roofs. Insurance broker Colucci (2013) approximates this savings to range from $100 to $800 depending on other factors which can change the premium by as much as 50%. Some insurance companies require a wind mitigation inspection to be performed to get this discount while others have agents who are qualified to make the decision themselves. Generally, a home must have a hip roof for over 90% of the home to qualify.

For more complicated variants of these two roof types such as a crossed gable, front gable, Dutch gable, or cross hipped roof, the issues to keep in mind are valleys and exposed vertical walls. Leaks are most likely to occur in valleys and where a wall meets a roof. Exposed vertical walls experience high wind pressures and wind-driven rain making it likely for water to get behind the siding. In addition, siding materials and finishes are often not as durable as roofing materials. In general, the more complicated the roof design, the more opportunities it will have to leak water and the more surfaces it will have to catch the wind.

In order for a hip or gable roof to succeed in areas that experience high winds and extreme weather, it must be properly designed and braced. Study the bracing plans provided by the truss manufacturer and ensure that the correct bracing is installed where indicated on the plans.

The quality of the construction workmanship significantly contributes to the durability of a roof, regardless of the roof type. Thus, it is important that all workers involved receive training on the proper construction techniques for building in an area that experiences high winds and extreme weather. This can be accomplished via adequate programs of training and continuous education for tradespeople, supervisors, and inspectors.

Your local building code jurisdiction will have zoomed-in versions of the national wind maps presented in IRC Figure R301.2(4)A and R301.2(4)B and the national seismic map in IRC Figure 301.2(2). Alternatively you can find the ultimate wind speed for your address of interest by entering it in the online ASCE 7 Hazard Tool. Be sure to select the correct ASCE 7 version that matches the ASCE 7 version used in the IRC version adopted by your local building codes jurisdiction. The 2018 and newer IRC use ASCE 7-16 version whereas the 2015 version of the IRC uses ASCE 7-10. The seismic design category of your building address can also be found using the Seismic Design Map Tool by the Structural Engineers Association of California. Note this tool works nationally, not just in California.

Get a Storm Ready Roof

Publication Date
November, 2016
Courtesy Of
LSU AgCenter
Description
Video explaining why having a strong roof is so important in hurricane zones and recommendations on how to construct a roof that will stand up to hurricane force winds from LSU AgCenter.
Preview Image

Which roof shape best stands up to the fiercest gale?

Roof bracing requirements are based on the ultimate wind speed and the seismic design category of the home’s location. This information can be found in the national wind maps in the IRC, Figure R301.2(4)A and R301.2(4)B, and the national seismic map in IRC, Figure 301.2(2).

The IRC requires in R802.10.3 truss design documents; however, it doesn’t require those documents to specify the method and details of restraint or bracing to be used. Thus, stickers like the one shown in Figure 3 show different options for restraint. Unlike the IRC, the IBC does require the method and details of restrain/bracing to be fully specified. Many truss manufactures will defer to the higher standards of the IBC even for trusses going to a residential project.

The IRC does have specifications on bracing the roof truss to the top plates in Section R602.10.8.2, which divides the specification depending on whether the house is in seismic design categories A, B, and C or categories D0, D1, and D2. bracing, blocking. One of the roof truss seismic bracing options in the IRC is illustrated in Figure 4 (Figure R602.10.8.2(3) in the IRC).

Appendix J regulates the repair, renovation, alteration, and reconstruction of existing buildings and is intended to encourage their continued safe use.

The decision on whether a home will have a hip roof or a gable roof is determined at the design stage, so this is a decision typically made during the design of new homes.

Insurance Difference Between a Hip and Gable Roof

The Importance of Roof Truss Bracing

Author(s)
Hershey
Organization(s)
4Ward Consulting Group
Publication Date
January, 2018
Description
A presentation describing the standards regarding who is responsible for what part of the design to ensure the roof truss is properly designed and braced. 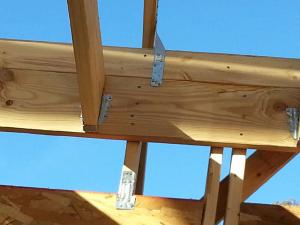 Designers and builders can choose from a variety of features to help minimize losses from high winds. The choice of features will depend on the severity and type of local wind events, but the entire continental United States is exposed to high winds. This is especially true for tornado and hurricane high-risk zones.  Measures are available to fortify all typical construction types, including concrete, masonry, wood frame, and structural insulated panels. Features may include structural strapping and bracing, wall cladding; roof sheathing and coverings; fortified entry doors, garage doors, windows, and skylights; and soffit and overhang design. Unvented attics can minimize pressure differentials that can destroy roofs and can reduce opportunities for wind-driven rain to enter the structure. This can be accomplished with closed-cell spray foam applied under roof decks or with structural insulated panels.